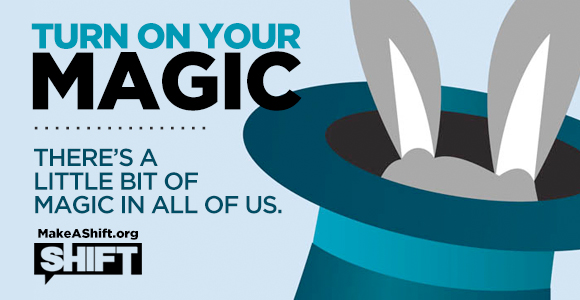 TURN YOUR MAGIC ON

It was chilly outside the night of the Super Bowl 2016 and me and a friend were standing outside sipping on a good drink waiting for the half-time show to start.  Cold Play was the featured music group and it was the first time I heard their new song “Adventure of a Lifetime”, (video below) which immediately caught my attention, mainly because it was a happy song and made me want to climb a tree or take off running.  I know there are Cold Play haters out there, but I don’t apologize for my love for their music and I feel it was this group that helped make the upright piano a staple instrument to have at center stage.

There’s a line in the new song that says “Turn your magic on” and it’s just one of many good motivational lines in the song.  There’s something very inspiring about someone telling you to “turn your magic on”, because whether you believe it or not, we’ve all got a little bit of magic in us.  Ever been in a situation where you needed to “perform” or do some convincing and someone close to you leaned over and said “Hey Steve, go do your magic”.  Steve is a fictional character, but yes, I’m sure many of you have had to do a little magic in your life, and I’m not talking about pulling a rabbit out of hat.

When’s the last time you had to “turn on your magic”?  When’s the last time you made some magic happen?  Well, it’s been too long and the world could use more magic.  For example, I know that one way I do magic comes in the way that I can make people feel.  For the most part I’m a positive person and I genuinely want to see people do great things in life, even though I myself may not be doing the same.  But it’s an honest desire and whether I’m having a great day or a moody one, I will go out of my way to make someone feel good about themselves by simply acknowledging them, shaking their hand with full attention, or by giving good hugs.  If someone walks away feeling motivated after meeting me then I’ve done my magic and hopefully they too will do the same.

3 WAYS TO TURN YOUR MAGIC ON

Just be yourself.  Every one of us is unique and different.  One amazing trait about us human beings is that though there are billions of us walking around on this planet, there are no two identical finger prints.  We all have different prints and it’s what makes you you.  You can’t be duplicated and you are who you are for a reason.  It’s up to you to figure out who that is and what you’re great at.  Once you figure that out, turn “it on” and be awesome at it and change the world around you.  Anyone can paint, dance, build, speak, create something, but no one can do it like you.

Everyone that I know who is great at something, whether it be a sport, craft, skill, or trade, is where they are because of dedication and practice.  No one becomes a master at what they love overnight and it takes time to get to the point where you can consider yourself a “pro” or “master”.  Even then those people have to continually practice to stay on top or on point.  The same goes for your magic.  Once you figure out what you’re good at, put it into practice and be great at it.  Whatever gifts you have are not there for you to keep to yourself.  The world needs you and your amazing magic.

Your magic is useless if you’re not ready to “perform” at any time.  Always be ready and even go as far as look for opportunities to “turn it on”.  With as much negativity as we have in the world today, we NEED more magic.  Make it happen and be awesome at it like the monkeys in this video.  They’re making magic happen and you’ll want to watch this magic over and over again.

Have a great St Patty’s Day.  Go find your pot of gold you little magic Leprechauns.