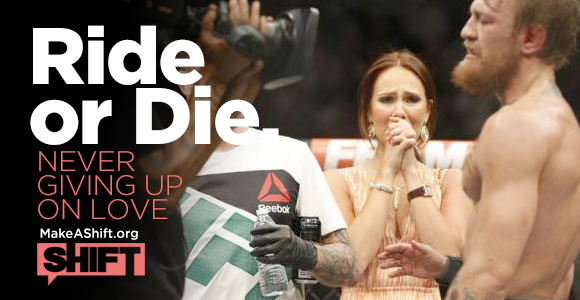 RIDE OR DIE:  NEVER GIVING UP ON LOVE

It’s Valentines Day and if you’re not already eating some chocolate that a special someone gave to you then you’re chilling at home watching the Notebook or Dear John, back to back, because that’s all they’re playing on cable for all you love birds, over and over and over.  Vday is definitely that one day that causes us all to pause and think about love, relationships, and yes, chocolate, lots of it.  Whatever you’re doing this beautiful day I wanted to share something about love that I hope you find helpful, especially if you’re in a relationship.

I hear the term “ride or die” regularly as a description for someone’s girlfriend, boyfriend, husband or wife.  It’s the ultimate term of endearment and if your significant other feels this way about you then you’re doing something right.  It describes someone that will stand by your side no matter what, someone who will ride with you through any storm or challenge in life until death.  It’s someone that will protect you, guard your heart, and never give up on you.  This is the kind of love and commitment that we all desire and if you have a ride or die in your life, cherish that person, because they’re hard to come by.

On Instagram I follow MMA fighter Conor McGregor and this week someone shared a post of his that clearly described a ride or die woman in his life.  Conor’s words about his partner were as follows:

“We’ve been together for more than eight years.  We lived in Ireland , 30 km from Dublin, in a rented apartment on the 188 euro unemployment benefit.  I had no job because I spent all my time at the gym.  I believed that I would be the champion, and she always did too.  She believed in me.  Despite the lack of money, Dee Devlin tried to get me to eat right and always keep my daily regimen.  She dedicated herself to it.  Coming home after an exhausting training session, she always said, ‘Conor, it’s okay, you can do it!”

Conor is now one of the most successful MMA fighters in the world and Dee is reaping the benefits of sticking by his side when he had nothing.  From what I’ve read and understand, these two are madly in love and she’s there in his corner, whether in the ring or out.

I’ve always been curious as to how a couple can be together or married for 40 plus years.  That type of commitment is slowly becoming extinct and being with someone that long is either a true testament to love or two people who got stuck.  I’d like to think that it’s love in most cases.

I know a couple who’s been married for 30+ years and one day I asked what the secret was to keeping it together.  The first response was of course “love”, lots and lots of love.  You can’t be with someone that long unless the two of you truly love each other and in this case the couple was still very much in love.  But it was secret number two that interested me the most and I feel that it’s the key to longevity in any relationship.  My married friend looked at me with all seriousness and said “Hector, the real secret however is forgiveness, an enormous amount of it.  Each person is going to fuck up, guaranteed, and those fuck ups will be plenty, and you’re going to each have to forgive one another over and over and over.”

I’ve had my share of fuck ups in past relationships and needed forgiveness, but I’ve also had to give it many times as well.  I’m a ride or die type of person and the past two serious relationships are ones that I never wanted to give up on.  My marriage only lasted as long as it did because I fought for it and I wasn’t going to give up on her.  My last relationship was full of love and required lots of forgiveness from both sides, but apparently wasn’t enough.

As you ride through life with your partner in crime, I’m sure you’re already learning this big secret to longevity and I’d like to say that you’ll master it one day but I doubt anyone ever does.  There’s no “one size fits all” manual out there for relationships but if you love that person next to you with all of your heart, don’t ever give up on one another and learn to forgive each other even in the worst of times.

If you’ve ever ridden on the back of a motorcycle with someone, the safest way to ride as a passenger is by wrapping your arms around the driver and holding on tight.  You realize how important this is when making turns or when the motorcycle accelerates.  If you’re not holding on tight you’ll fall off that bike so fast and either die or experience lots of pain and no one likes pain.  Hold on tight as you two ride through life and don’t let go.  Life will have so many twists and turns and you simply need to lean into those turns together.  As life speeds up or even slows down, hold on tight and have fun.  Be each other’s best friend and when the other person “fuck’s up”, show them how much you love them by giving them the best and most powerful gift you can give, forgiveness.

Love is powerful and it’s best friend is forgiveness.  Walk with these two daily and hopefully you can look back 20 or 30 years from now and say “Thank you so and so, for never giving up on me and being my ride or die”.

10 Valentines Tips that will make you look awesome today.

Today is Valentines Day.  Flower shops will make a killing, women will receive a guilt free day of chocolate binging, and restaurants will make tons of money off of couples trying to do that whole romantic dinner thing.  Whatever you have planned today, have fun and enjoy this day that celebrates Love.

For those of you going out, here are a few nice little tips from my friend Morgan Williams.  Her tips are perfect not only for today, but everyday.  She refers to these as the “basics”, but whether you’re already doing these or not, the world will be a better place if we all took a few notes from Morgan:

FOR ALL YOU MEN OUT THERE

1. Open every door for her. Do not let her open it as she is used to doing, surprise her by being a …gentleman.

2. Slide her chair out for her and assist her in taking it closer to the table. You may feel odd doing this, as you never know what chair she wants, and the host is in the way, but regardless – DO IT.

3. Ask her what she would like to drink then order for the both of you, but no matter what don’t answer the server first – that is so rude and it shows you do not know any better and are not aware of her. We want to know we are safe with you, which means you’ve got to think about her, not you.

4. When the server would like to know if you would like any dessert, ask the lady -regardless if you want any or all of it or even none.

5. Make reservations, clean your car (even if its an older model)

1. Be nice. Be a pleasant person to be around, not always complaining and rude. Let your date treat you right.

2. Let him open your doors. I know it feels odd when the car is turned off and you are sitting in the dark hopping he knows to open the door. This is new for both of you.

3. You better look good for your man, but no hoochie momma clothes. You are not going to a club after. You are a classy lady.

4. Your date has probably planned more than you can see, and is nervous, and etc. – Never cease to say thank you, your date will be grateful to know you saw the effort made and appreciate it.

Have fun out there.  Be careful.