When Life starts acting up, Kick it in the chest. 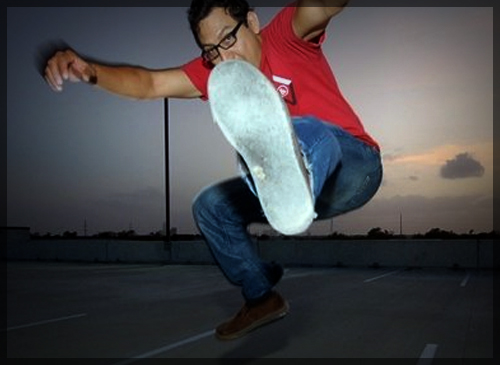 It was 1985, the sun was down, other kids were playing around the apartments playground, some were playing basketball, a few were playing marbles off to the side, and me, well, I was breakdancing of course.  Everyday after school we would hang out in the playground with our huge piece of cardboard and we’d practice until we couldn’t dance anymore.  We moved to these apartments for a year for several reasons, just me, my mom, her new husband at that time and my little brother Rocky.  He was around 8 years old with the coolest bowl haircut ever seen.

As we were dancing and hanging out, I was interrupted by the sound of my little brother yelling at a bigger kid to leave him alone.  There was a chubby little kid in the complex who was known for being a bully and he was messing with my little brother on the other side of a 20 foot fence.  I shouted at that kid from the other side to leave Rocky alone but he wouldn’t give.  I don’t know what came over me at that point, but I started running towards the fence exit, ran full blast around to the other side, fixed my eyes on the chubby boy and as I got about 10 feet from him I jumped in the air, extended my leg and kicked him right in the chest!  This was all spontaneous and something I had never done before.  I had never taken karate or any type of martial arts.  This all just happened instinctively.  Could have been my natural born ninja skills coming out.  I don’t know.  Well, the kid went straight to the ground, trying to catch his breath.  Everyone who witnessed this were trippin of course.  I was trippin as well.  I just did a flying karate kick to a kid’s chest!  What the?  I think I played it off like I knew what I was doing and took my little brother back to the other side of the fence with me.

Later that night we get a knock on our door.  My mom is home by this time and she answers.  Standing outside was this kid, his dad, and older brother.  All i remember is the dad pulling the kid’s shirt up and seeing a bruise on his chest in the shape of my shoe, sole pattern and all!  My mom took care of me that night with the belt, but I’m sorry, as a kid my age, seeing my shoe imprint on a kid’s chest was something out of one of those old school karate movies and it seemed worth the belt woopin.

I would of course never recommend that any kid do this, unless you’re being bullied and need to protect yourself or your little brother.   I’m not the violent type either and this was probably the only physical encounter I ever had growing up.  But if there’s a moral to this story at all, maybe it’s this.  Life is going to bully you around as long as you’re alive.  There will always be something that tries to steal from you, push you around, break you and beat you up.  All you can do is stand firm and fight back.  Don’t let life win.  When you need to do a flying kick to the chest of something that’s bringing you down, kick it!  If you find yourself in a helpless situation, choke it or punch it in the face.  Don’t be afraid to do what instinctively feels right to protect yourself.  Be strong.  Allow others to be strong for you.  And to those that believe in something bigger than yourself, allow God to be your strength always.

From one ninja to another, keep kickin.