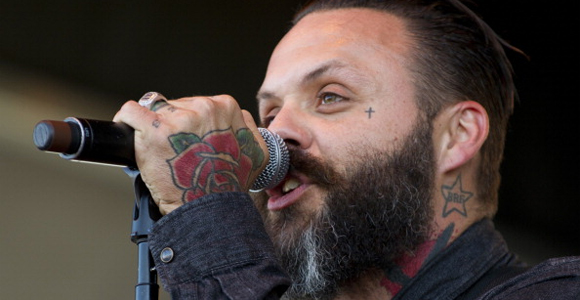 I’m here in LA, sipping on coffee in the hotel room and surfing through Youtube, looking for acoustic sets from Blue October or Justin Furstenfeld, the lead singer of the band.  Yeah, I’m in the mood for all of their music after experiencing a very powerful and emotional acoustic concert from Justin last night in Hollywood at the Hotel Cafe venue.

My girlfriend loooves the band and everything Furstenfeld and booked this trip a few months ago.  I’ve seen the band live several times with her and it’s only because of her that I even know who Blue October is.  Last night’s concert was, for me, one of the best yet, mainly because of the intimate setting and between each song he shared some very personal stories and explanations for each song.

But the biggest highlight of the entire night was not running into him in the bathroom or having a quick chat with him before and during my sitting in the bathroom stall.  It’s when he did as promised to me and dedicated a song to my girlfriend Christine during his set.  If the bathroom encounter wasn’t enough to put her in awe, the moment when Justin called us out in the crowd and asked where his “peeing buddy” was at, caused fireworks to explode in her tiny little heart.  She lost it once he made the dedication of “Calling You” to her, and the slow, soft acoustic intro to the song even made me want to tear up.  It was a very powerful moment and something neither of us will ever forget.  He also commented on how awesome my beard was, which I kindly offered to let him touch anytime he wants.  The offer will always stand.  haha.

Christine’s connection with Justin and the music of Blue October goes deeper than just being a fan of the music.  Justin has always been very open about his battle with mental illness and depression and even last night he joked about having been put on Paxil at an early age and how awesome it made him feel.  Christine was diagnosed with Bipolar a few years ago and since then has worked her ass off to stand strong and conquer this illness in her life.  She’s also become a very strong advocate for others and I’m sure will continue to do so forever.

So if this blog post reaches Justin somehow, I want to thank you for what you did last night.  It meant more than you know and even though your dedication brought tears to her eyes, it also brought about a very very huge smile.  Thank you.